I think it's a fairly common practice for people to use colors to denote different bird species. After all, that is normally what first catches your eye. Here in the Midwest, "redbirds" are Northern Cardinals, "bluebirds" are, well, Eastern Bluebirds - or perhaps the occasional Blue Jay or Indigo Bunting. But "blackbirds" normally encompass several different local and non-local species. There is probably a good reason for that. Our black-colored birds like to travel in flocks; mainly in the colder months. Therefore, viewing them with an untrained eye can lead to a generalization, "Look, there's a blackbird!", when in reality, there is a lot more to it than that.

Our black-colored birds are already starting to group together. This tends to occur each year in September, right around the onset of the grain harvest season. You'll first start to see them on overhead wires and cables, lining up in a row like highly organized troops. And I have already witnessed large flocks teaming up in open fields. These large flocks will be a much more common sight as the weather grows colder. There are several reasons they do this. Ever hear the term "safety in numbers"? Our black-colored birds truly take this notion to heart. Safety, warmth, feeding and foraging are all reasons for them to group together. Observing these birds on overhead wires is a fairly common sight; but if you really want to see their flocking behavior in full-on, beauty-of-nature fashion, try taking a drive into the country on a cool fall or winter day. Ribbons of flocking birds undulating in synchronic flight patterns are absolutely spectacular to behold. 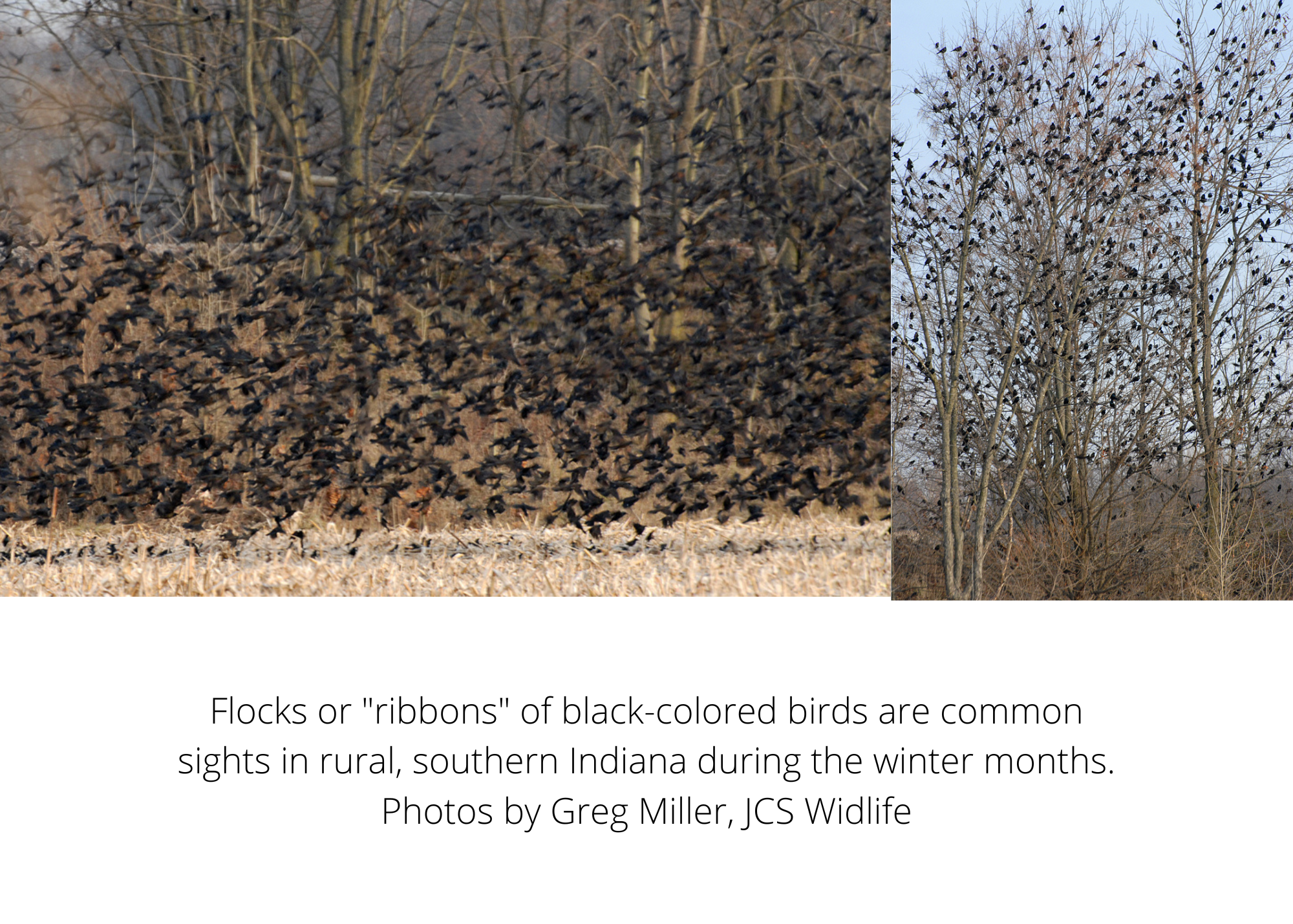 1) European Starling: These birds have a bad reputation, no two ways about it. They are the playground bullies. They feed and forage en masse and can gobble up your backyard bird seed about as fast as you can put it out there! These birds are one of two non-native, common birds that are considered invasive. First introduced into Central Park in New York City in the early 1890's, their numbers have grown from 100 to 200+ million today. They are experts at adapting to their new surroundings and are now thriving here in the U.S.

2) Brown-Headed Cowbird: While this bird is native, it still gets a bad reputation because of it's nesting behavior. They are our most common species of "brood parasites". The female cowbird does not build a nest; but instead, she lays her eggs in the nests of other birds. When the eggs hatch, the surrogate female will care for the cowbird babies as if they were her own. Once raised, the cowbirds will return to their own family. The main problem with this inherent behavior is the cowbird is typically larger and more aggressive than the other hatchlings in the nest. They can easily shove out smaller birds and eat their portions of food.

3) Red-Winged Blackbird: I personally find this bird to be the most beautiful of all the black-colored bird species. The male in full breeding plumage is unmistakable to the eye in the spring and summer. The bold red shoulder and slightly smaller yellow wing bars underneath are spectacular against their jet-black bodies. Conversely, the female is one of the most misidentified birds. While beautiful in her own way, she is stockier than her male counterpart, and is mostly brown with white streaks and some yellow patches around the bill. 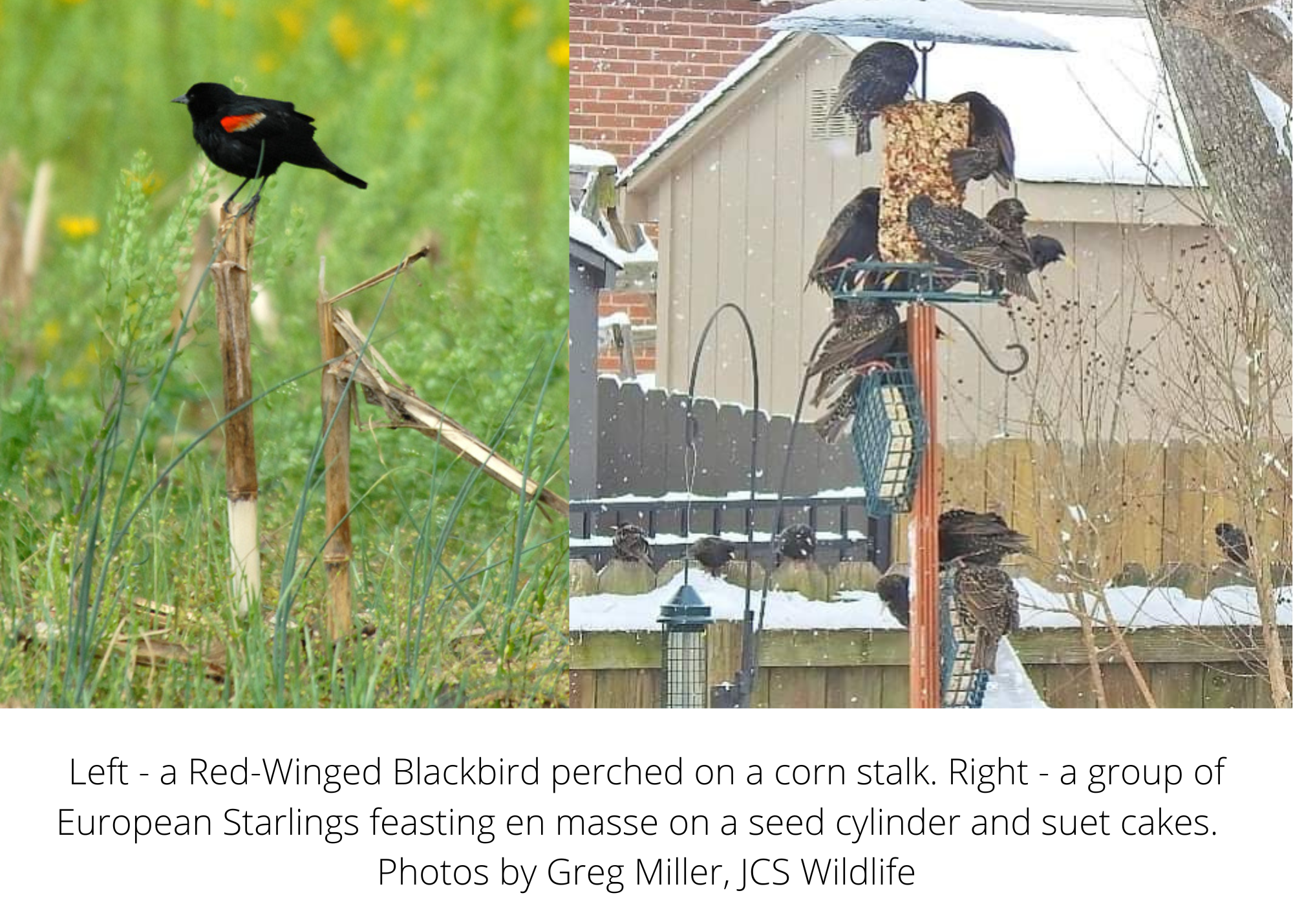 4) Common Grackle: This bird is probably the most common of our native, black-colored birds. Grackles can be seen year-round in the eastern two-thirds of the US and into Canada. They have long legs and more of a slim body shape than the beefier European Starling. Grackles are easily identified by the prominent yellow eye with a black center, which I personally find menacing. You will find grackles mainly foraging on the ground; although they will come to a feeder. More often than not you will find them under your feeder, cleaning up the morsels on the ground kicked out by the feeder birds. I chuckle at the way they move on the ground, much like a chicken in a coop pecking at cracked corn. The plumage on these birds is iridescent - especially on their heads. In the sunlight, they will cast brilliant, glossy patterns of teal, purple and blue colors. To me, they are one of the most under-appreciated birds when it comes to their beauty. 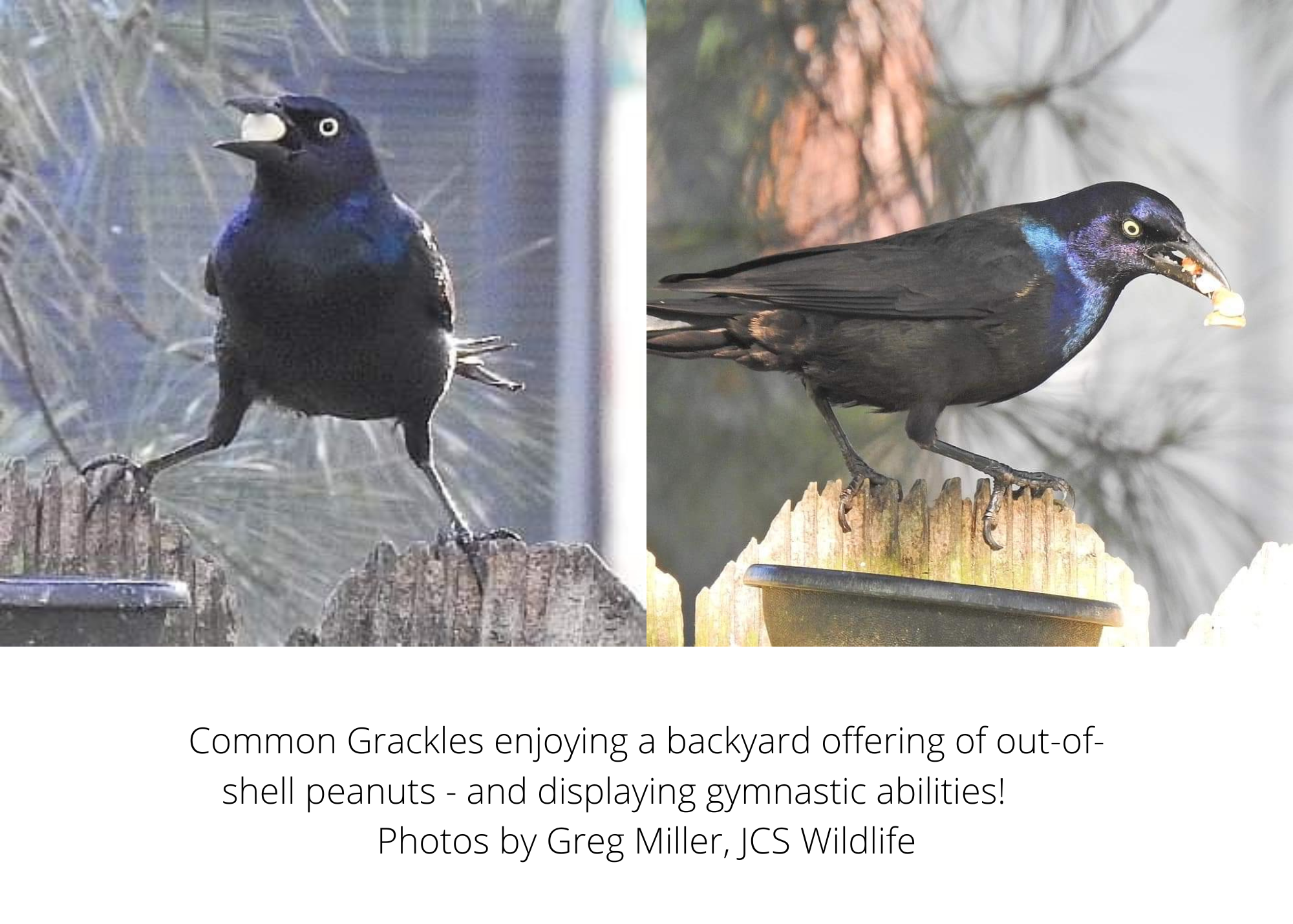 At the same time, these beautiful creatures can also be quite the nuisance. They love corn; and will eat more corn out of a field than a crow on any given day. They travel, feed and forage in the same flocks with the other black-colored birds I mentioned earlier. Their numbers are right up there with the European Starlings. They can also be bullies, much like their starling counterparts. Grackles are omnivorous and will eat a great many things, including corn, nuts, bird seed and insects. They have even been known to scuttle the nests of songbirds, feeding on their eggs or hatchlings.

Grackles also have a couple of characteristics or habits that I have actually witnessed and find most intriguing. They are one of the more common species who practice "anting". They will perch on the ground with their wings splayed out, allowing ants to crawl around among their feathers. Ants secrete formic acid, which in turn may kill mites which have taken up residence on the bird and in their nests. Grackles also can be seen "washing" their food - think raccoon! We have a ground-level bath in part of the landscaping in our backyard. We will commonly observe a grackle grabbing an out-of-shell peanut from our dish, then taking it to the bird bath. It will drop the peanut into the water, take a couple of drinks, then retrieve the peanut for eating. The jury seems to still be out on just why they do this. The peanut isn't in the water long enough to soften it. Perhaps the water allows it to be swallowed more easily? Or maybe digested more efficiently? Who knows for sure - but it remains an interesting behavior that I find fascinating to watch.

In conclusion, yes, we sometimes tend to group our like-colored birds into the same species bucket. But as you have now learned, there is more to the story than that. Our group of black-colored birds is actually comprised of 4 distinctly different species; 3 native, and one introduced in the U.S. over 130 years ago. While each of the 4 species is unique in their own way, they still share a common, team mentality when it comes to navigating their world today. By working together, they increase their chances of survival and species sustainability. Maybe others would benefit from this same relationship!